A History Of Innovation & Quality

Johnson Heater Corporation was founded in 1921 as a mechanical contractor involved in the design and install of HVAC systems throughout the New England area.

The concept of Air-Rotation® was invented and patented by Nelson Johnson, the founder of Johnson Heater Corporation in the 1950’s. Prior to this patent, Nelson also experimented with Air-Rotation with large floor furnaces designed for gravity heat distribution in the 1940’s. Nelson modified the furnaces to provide a single point of introducing heat into a large open space, and then modified the furnace to circulate the heat output with a ductless fan system. The early systems took the form of a brick mason building a firebrick heat chamber and various forms of indirect-fired metal shell and tube air-to-air heat exchangers. The early experimental data indicated the key to properly conditioning a large open space was the air circulation between a high discharge and a floor level return. Heat could be directed, or ducted into a large building by any number of heat producing devices; but if it was not evenly distributed, there would be hot and cold spots, stratification and wasted heating fuel that would fail to satisfy the thermostat control. Nelson gathered vast amounts of data and monitored the heating fuel used in actual buildings. To monitor fuel usage on a fair basis, he used the then newly developed “Degree Day Method”, a system pioneered by fuel oil distributors to predict when fuel oil deliveries would be needed by their customers. Nelson was able to show considerable fuel savings while providing other demonstrable benefits. The patent on the Air-Rotation® concept was merely the beginning. The application of the Air-Rotation® concept has been constantly refined by Nelson’s successors at Johnson Heater Corporation.

The early Air-Rotation® HVAC Systems in the 1950’s and 1960’s used a centrifugal blower to distribute the heat in the large open plan buildings. The early Air-Rotation® HVAC Systems were free standing, ductless floor mounted units and did not require the high static handling capability of centrifugal fans. Johnson engineers developed quiet, high-efficiency axial fans that could adequately move the air through the heating unit and provide the necessary air circulation in the conditioned building. By the mid 1970’s two horizontally mounted axial fans of 7-1/2 Hp. each were doing the job of a previous 40 Hp. centrifugal blower. This, however, was only the beginning! 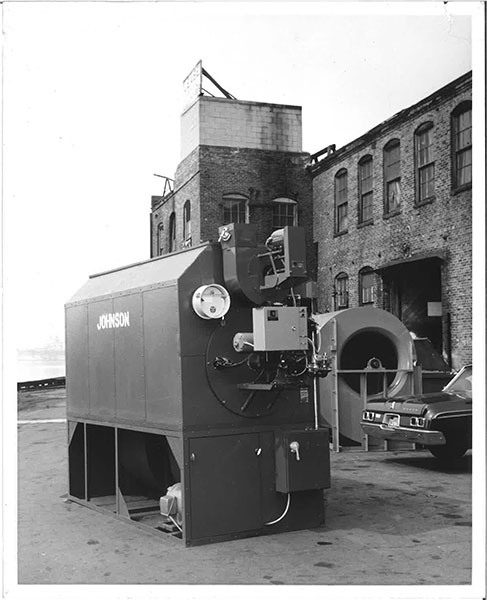 Since 1921, Johnson Air- Rotation HVAC Systems has been a leading manufacturer of HVAC products for many other large, open-spaced industrial buildings. Johnson’s revolutionary Air- Rotation technology provides the most energy efficient way to heat, cool and ventilate open-span buildings.

Since the 1970’s, MarCraft Custom HVAC Systems has been a leading supplier of highly-custom HVAC equipment. MarCraft’s engineers take a “blank sheet of paper” approach to creating mechanical solutions to its clients’ wide range of challenging heating and cooling needs.

Arizon Building Systems is the recognized expert in the fabric building industry, providing a variety of services worldwide. The Arizon team is lead by the most knowledgeable and motivated people, as several of our key personnel have more than 25 years of industry experience.

Johnson Air-Rotation HVAC Systems has over 200 direct employees, including a team of over 30 structural, mechanical, and electrical engineers, designers, welders and field service technicians.

Johnson Air-Rotation HVAC Systems has over 200 direct employees, including a team of over 30 structural, mechanical, and electrical engineers, designers, welders and field service technicians.

Arizon has approximately 200+ employees, including a team of over 30 structural, mechanical, electrical and civil engineers, designers, and architects. We have over 180,000 sq. ft. in production facilities including an 80,000 sq. ft. air-supported building. With our brands we are the leading manufacturer of Air-Rotation HVAC systems, highly-custom HVAC equipment, and air-supported structures.

Want to Learn More About Air-Rotation?